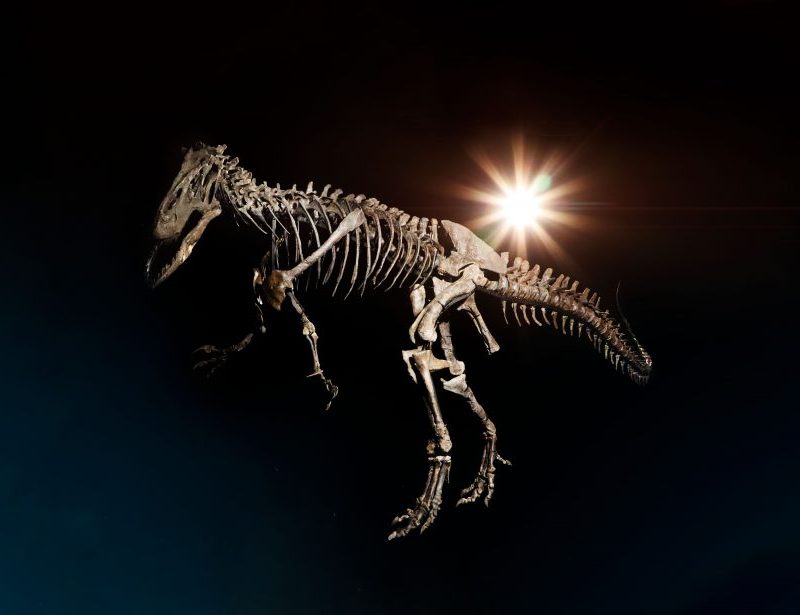 The world’s best-preserved specimen of the killer dinosaur Allosaurus has moved in. The gigantic Allosaurus dominated the Earth for more than 10 million years, where it not only killed all the prey it encountered but even kept the population of the Tyrannosaur family so low that they never stood a chance against the murderous behemoth.

We are 155 million years back in time on a North American flood plain. A muscle-bound specimen weighing one and a half tons stands completely still on its two powerful legs and looks around. It is all alone. Briefly, it opens its jaws and bares its dense, razor-sharp teeth, which have had to go without fresh meat for far too long. It waves its arms a little and chops the air with its deadly claws, as if launching one last attack. Then the lonely dinosaur slowly plods into the shallow river.

This is how the story of Big Joe’s last hours begins. Today, approximately 155 million years later, the Jurassic’s best-preserved Allosaurus skeleton, Big Joe, remains more than 95% preserved! Allosaurus was the top predator of its time, just like the Permian reptile, Dimetrodon, which can also be seen in the park, was 100 million years earlier. And just as T-Rex would be 90 million years later.

A rough life for a rough customer

Big Joe hatches out of his egg in a lush, prehistoric forest filled with ferns and giant conifers. A frog croaks nearby as Joe rises from the nest to encounter a merciless world that will force him to hone his running and attacking abilities. In the following years, Joe grows massively and trains his hunting skills. Soon, he has evolved into a muscular, 9-metre-long, slashing killer at the top of the food chain.

The lower bones in Big Joe’s right leg are so badly injured that they grow together and almost turn into a lump of bone. The trauma probably took place in a bloody battle against a predatory dinosaur or in the hunt for a Stegosaurus. But Big Joe will live on for many years despite the gruesome injuries. This can still be seen in the bones, which are on display in Knuthenborg today.

Had its fill of life, but not of prey

The powerful bones feel way too heavy on the last day of Big Joe’s life. The dinosaur suddenly sinks into the soft sand and is about to lose its balance. For a second, it thinks it will remain upright, but it can’t move its right leg fast enough, and soon after, the nine-metre-long Allosaurus lies stretched out on a small sandbank. The animal tries to rise, but must give up and instead turns its head backwards as if to see its own tail one last time. Then it takes its final breath. Tired and worn out.

A few hours later, the river swells and slowly covers the dinosaur’s body with fine sand. The skeleton first appeared again in 2015, when professional dinosaur hunters were examining some rocks in Wyoming in the United States. Their eyes grow wide as they move a giant layer of sandstone to uncover the skeleton of the Jurassic ruler – the predatory dinosaur Allosaurus – which lies completely as it did when it took its last breath.

Today, Big Joe, the world’s best-preserved specimen of the killer dinosaur Allosaurus, stands in the middle of Knuthenborg.

Read more about the sensational dinosaur find and the research of the skeleton here.