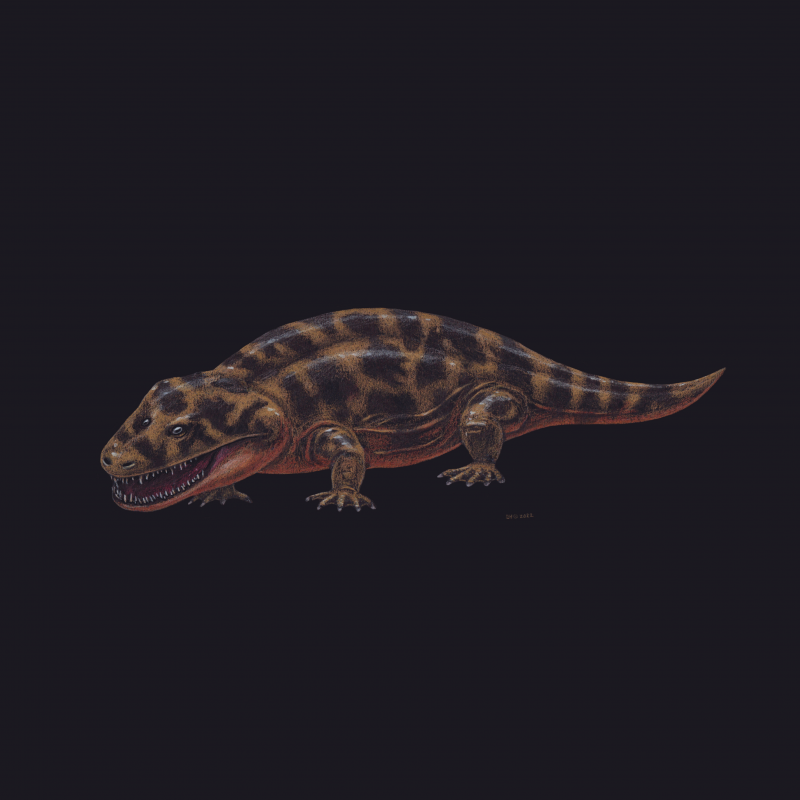 Edops was Eryops’ slightly older cousin (‘more primitive’ as it would be said in palaeontology-speak). Edops originated in the Carboniferous period, the time just before the Permian period. A perfect period for a huge toad-like creature like our Edops craigi. During the Carboniferous period, vast swathes of swamp forests were formed. Here, near a lake, Edops has been lying down and relaxing among fallen leaves and cones. No birds have yet seen the light of day, so it is quiet and calm here, interrupted only by a fish splashing the water’s surface, the buzz of a giant dragonfly and a crunch on the forest floor as a metres-long millipede wanders through a pile of dead common horsetail.

But then came the Permian period, and the climate changed so that there were periods during which it was dry and barren. This was quite the upheaval for our big toad, Edops, which is why she stays close to the waters of the Permian period. She has not yet developed a way to be able to lay eggs on land, so the newborn Edops young are hatched in water. Here, at the water’s edge, the adult Edops waits for its young to grow big enough to come up onto the shore, and while she does, she lies in wait for delicious meat to sink her teeth into – perhaps the fish that splashed its tail on the water’s surface. Edops actually means “swollen face” and was given this name due to its huge snout tip and tiny nostrils – try and see for yourself. You can find Edops’ fossils in the red sandstones called ‘Texas Red Beds’ – which are the ones you are standing on right now.

Size: Up to 2 metres long

Habitats: On land and in water