Big Joe is coming to Knuthenborg 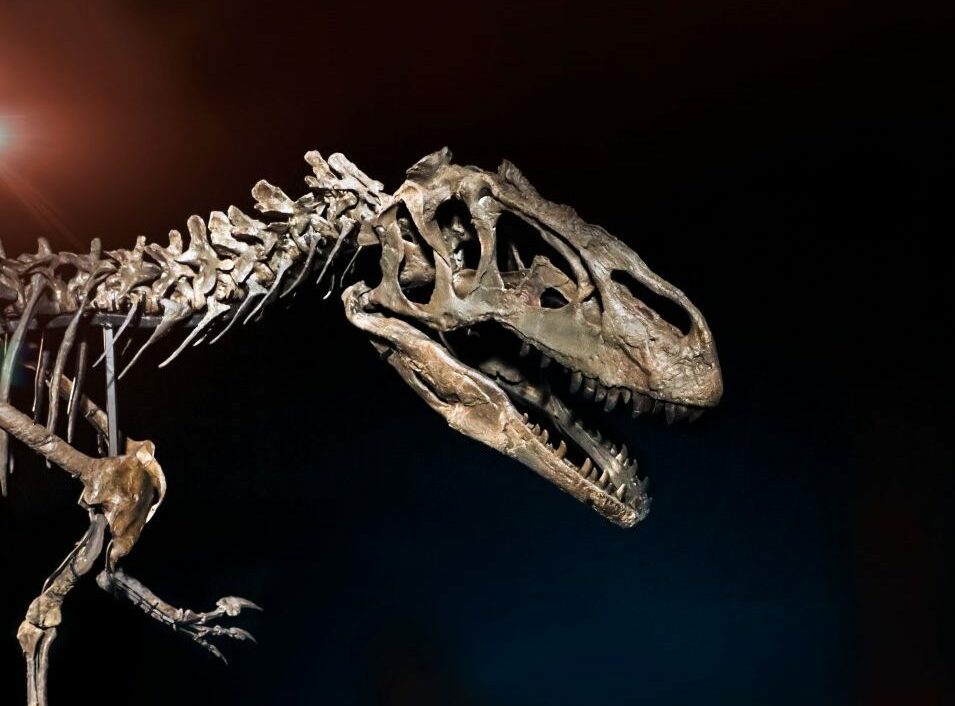 The ultimate predatory dinosaur of the Jurassic period settles in Denmark

A sensational new dinosaur discovery has arrived at Knuthenborg Safaripark. It is the most complete specimen of an Allosaurus – the dinosaur genus that was at the apex of the Jurassic ecosystem. And both the skeleton and the unique skin imprint are the subject of exciting new research.

We are approx. 155 million years back in time on a North American flood plain. A muscle-bound specimen weighing one and a half tons stands completely still on its two powerful legs and looks around. It is all alone. Briefly, it opens its jaws and bares its dense, razor-sharp teeth, which have had to go without fresh meat for far too long. It waves its arms a little and feebly chops the air with its deadly claws, as if launching one last attack. Then the lonely dinosaur slowly plods into the shallow river.

The powerful bones feel way too heavy on this last day of the giant’s life. The dinosaur suddenly sinks into the soft sand and is about to lose its balance. For a second, it thinks it will remain upright, but it can’t move its right leg fast enough and soon after the nine-metre-long Allosaurus lies stretched out on a small sandbank. The animal tries to rise, but must give up and instead turns its head backwards as if to see its own tail one last time. Then it takes its final breath. Tired and worn out.

A few hours later, the river swells and slowly covers the dinosaur’s body with fine sand. The skeleton first appeared again in 2015, when the professional dinosaur hunter Brock Sisson and his colleagues were examining some rocks in Wyoming in the United States. Their eyes grow wide as they move a giant layer of sandstone to uncover the almost complete skeleton of the Jurassic ruler – the predatory dinosaur Allosaurus – which lies completely as it did when it took its last breath.

“Our focus is on both scientific dissemination and research in the field of evolutionary history. For this reason, the Allosaurus will also be available to Danish and foreign scientists who want to do further research on this fascinating ancient giant,” says Christoffer Knuth, director of Knuthenborg Safaripark.

Right up to the opening of the exhibition there has been intense research on Big Joe, as this Allosaurus specimen is commonly known. One of the most recent results actually came up by accident. During the preparation of Big Joe, one of his bones broke in the middle, and when the researchers examined the fresh fracture surfaces, they saw a completely intact bone structure. And just as a tree has annual rings, Big Joe’s bones also reveal fine growth layers that show the dinosaur’s growth year after year. The researchers were able to count nearly 30 rings with the naked eye, making this a dinosaur that was getting on in years when it made its final journey. And that makes Big Joe something very special, because never before has an Allosaurus been found that was more than 20 years of age.

Another spectacular research result has nothing to do with the skeleton. Instead, it is the imprint of Big Joe’s skin – an imprint that was created when it lay on the sandbank of the river and was later covered by sediment. A large part of the animal’s skin and scales have been preserved as imprints, and this is quite exceptional. Previously, only a single other Allosaurus specimen with skin imprints had been found. And that imprint was only the size of a 100-kroner banknote. Now Big Joe offers the opportunity to reconstruct an Allosaurus far more correctly than has been possible so far.

“Among other things, imprints of Big Joe’s skin and dandruff have been preserved on the underside of his neck. This pattern has never before been observed on a dinosaur. The scales have a pattern that is very similar to what you see on the underside of snakes,” explains palaeontologist Mark Loewen, PhD and associate professor at the University of Utah, who over the past year has conducted a research project focusing on Big Joe’s skin and dandruff. Loewen’s research team expects to be able to describe the entire animal’s exterior once the research project is completed.

The well-preserved skin imprint indicates that Big Joe was completely alone as life leached out of his body. If other predatory dinosaurs had found the body, it would have been slashed and ripped to pieces. The body would probably also have been torn apart, and parts would have been taken away to be eaten at a safe distance from other scavengers. But the entire skeleton is preserved in exactly the position that Big Joe lay in when he died about 155 million years ago.

The few bone fragments that are missing are solely due to the fact that some of the rock in which the fossil was found had been eroded. But fortunately, more than 95% have been preserved. That makes Big Joe the best-preserved Allosaurus fossil ever found. Measuring nine metres from snout to tip of its tail and with a shoulder height of three metres high, it is also the largest Allosaurus fossil that has ever been found. So there’s good reason to get excited as Big Joe settles in at Knuthenborg Safaripark.

The top predator of the Jurassic

Allosaurus was built to kill. It was big, it was strong, it had a mouth filled with sharp teeth, it had sharp claws on its hands and feet, and it had forward-facing eyes that could focus on its prey. It was the perfect predator.

“Allosaurus may have hunted in the same way as today’s lions do. It could run down its prey, hold onto it with its powerful, deadly claws and it could kill its prey with its strong bite,” explains Mark Loewen.

Allosaurus was not just a large predator. It was also widespread. Big Joe and his relatives were at the very top of the Jurassic food chain. In an area stretching from New Mexico and nearly 1,000 km north, Allosaurus was for 10 million years the most widespread predatory dinosaur in the late Jurassic. And it didn’t confine itself to North America.

“We have found Allosaurus species in Portugal. So we know that these animals lived in Europe. And a close relative lived at the same time in Africa,” says Mark Loewen.

Palaeontologist Jesper Milán, Curator of Geology at Geomuseum Faxe, is himself responsible for several of the Danish dinosaur finds. And even though Big Joe did not grow up in Denmark, the curator is excited about the opportunity to study this unique find closely.

“I see some exciting opportunities for students at the University of Copenhagen, who can conduct a project on a real skeleton,” says Jesper Milán, who also sees the potential for both Danish and foreign researchers:

“As it is the first Allosaurus with larger pieces of well-defined skin imprint, it provides unique new knowledge about this type of dinosaur, and I can easily imagine that there are other scientists who have obtained ideas for more research,” states Milán.

Jesper Milán reckons that he will have plenty to do because he has entered into an agreement with Knuthenborg Safaripark to mediate the contact between the safari park and the researchers who want to do further research on Big Joe and his skin imprint.

One of these potential research projects is the exploration of an ankle injury that Big Joe sustained at one point. Predatory dinosaurs lived a hard life, and it was not uncommon for them to be harmed in their brutal hunt for food. And Big Joe was no exception. Brock Sisson, who has led the preparation of the fossil, says that Big Joe’s calf and shin bones have grown together with a couple of the ankle bones on his right leg. But since the bones were completely healed, Big Joe continued to be able to obtain food. The injury probably meant that in later life, Big Joe was slightly lame when chasing his prey.

The king of dinosaurs

Allosaurus is often called the king of dinosaurs, but it is not the only dinosaur that has been given this title. The best known of these is probably the Tyrannosaurus rex, or T-Rex as it is commonly referred to. However, Allosaurus lived almost 90 million years before T-Rex. In Big Joe’s time, T-Rex’s ancestors, the tyrannosauroids were smaller and weaker and could only hope to feast on Allosaurus’ leavings if Big Joe or his relatives were in the vicinity.

“Comparing Allosaurus with the contemporary tyrannosauroids is like comparing today’s lion and jackal,” explains Mark Loewen.

Although Big Joe and the much later T-Rex are similar in many ways, Big Joe is different due to his powerful arms that he actively used during hunting. The T-Rex had small, useless arms, so it could only land its prey by biting down with its powerful jaws.

Until recently, it was thought that only a single Allosaurus species lived in North America, Allosaurus fragilis. But in 2020, Mark Loewen and his colleague Daniel Chure documented in the international journal PeerJ that another species existed, namely Allosaurus jimmadseni. And Allosaurus jimmadseni is actually the predecessor to the more well-known Allosaurus fragilis. Big Joe belongs to the newly discovered species. And as it is both the largest and best-preserved fossil of all Allosaurus specimens, it provides an opportunity to gain completely unique knowledge about this new dinosaur species.

Big Joe can be experienced at Knuthenborg Safaripark, where he occupies a newly built exhibition hall that will be opened to the safari park’s visitors on 9 April. In time, Big Joe will be joined by other dinosaurs, which together will make the exhibition Denmark’s largest permanent dinosaur exhibition.

Along with Big Joe, a number of the even older prehistoric giants will be moving into the neighbouring building. These are fossils of the four-legged giants of the Permian period, who more than 120 million years before Big Joe came on the scene, ruled the Earth and laid the foundation for the mammals of today that roam the vast savannah of the safari park.